Below you find music to jam along with by using Minor scales on keyboard or piano. The Minor Scales Backing Tracks album include pop ballads, soul, blues and other styles.

You can use a single scale for the whole song. A tip nevertheless: if you can't recognize the chords, be restrictive with – or use primarily as passing tones – the 2nd and 6th notes in the scale since they will create dissonance against the 3rd and 5th scale notes when these are present in the chords.

What was just said can be analyzed and illustrated more in depth. If the A Minor key is used as an example, it can be seen that the notes A, C, E, G are each present in three of the main triads which can be harmonized from the scale notes. The 2nd and 6th scale notes, in this case B and F, are each present in two of these chords. Besides from creating dissonance against some of the chords, the B and F notes, are also less present in the chords in general (which is not said that they always are in songs played in the certain key). See Harmonizing Minor scales into chords for more table overviews.

And don't forget what is all about – improvisation. You can use notes outside the scale as well, which often can contribute a lot. For instance, you can slide down from a black key (which tone is outside the scale) to a white key which note is included in the scale; try to find which black keys works with this approach.

Click on “Show scale” below the audio element for scale charts adjoining each track. 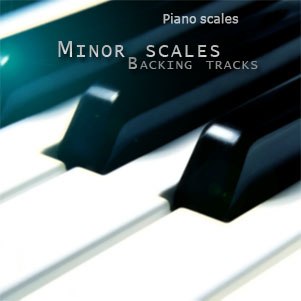