Music in major keys without piano parts made for improvise and exercise with on keyboard or piano.

Backing tracks are music arrangements that can be used for play along with. The tonal flavors in all sorts of scales makes them magic tools for playing over chords and music arrangements. The Blues Scales Backing Tracks album, for example, includes instrumental tracks made specially to be used with the Blues scales.

You don't have to change scale with chord changes. Instead, you can use a single scale for the whole song. Click on "Show scale" below the audio element for a diagram of the scale to use. 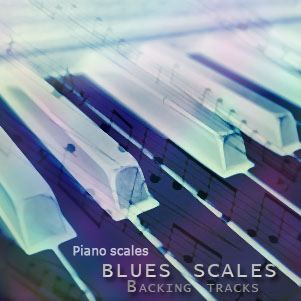 The full album (including 14 tracks) is available in the member area.

Major Scales Backing Tracks
17 tracks, one for each major scale.

Minor Scales Backing Tracks
17 tracks, one for each minor scale.

Blues Scales Backing Tracks
14 tracks, in the style of blues.