A single scale can be used for the whole song. A tip: instead for using both hands simultaneously or only one exclusively, try to use both the hands, but in different parts of a song and find dynamic approaches with bass and treble.

Some of the backing tracks, such as "Cm Funk Mania", "D#m Rock Waltz" and "Gm Modern Pop Groove", will probably work better playing to on a synth or synth keyboard instead for an acoustic piano.

Click on “Show scale” below the audio element for scale charts adjoining each track. 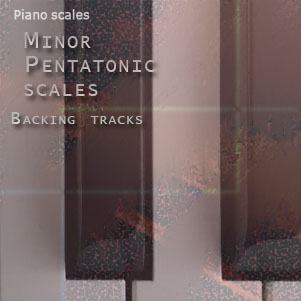 The full album (including 17 tracks, one for each Minor Pentatonic scale) with chord details is available in the member area.