These backing tracks for jazz gives you a chance to improvise on the piano by using major and minor scales.

Backing tracks are music arrangements that can be used for play along with. And here you got an possibility to play along in a very easy way since common scales are used. The Jazz Piano Backing Tracks album includes instrumental tracks made specially for jazz piano. Prior knowledges with Major and Minor scales are great, but you can also use these backing tracks without knowing the scale by clicking on "Show scale", which make the relevant scale visible.

You don't have to change scales with chord changes. Instead, you can use a single scale for the whole song (a tip is although to listen and be restrictive with some notes that seems to collide with the notes in the chords that are played; for example, the fourth note in the major scale will often not sound very good over a major chord). To make it a little more sophisticated and jazzier, you can involve other scales and one simple approach is to use chromatic scales (especially in bebop, chromatic notes are used a lot). You can also play chords, 7th and other extended chord types are most suitable.

In coming updates, licks to use will also be presented. 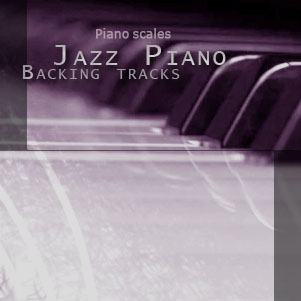 The full album (including 10 tracks) is available in the member area.

Major Scales Backing Tracks
One for each major scale.

Minor Scales Backing Tracks
One for each minor scale.